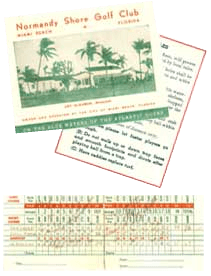 The land for the golf course was donated to the City of Miami Beach by M. C. Gryzmish on January 4, 1928, a year later the City took possession of the land.

Most of Miami Beach was transformed into a training camp for the U.S. Army –Air Forces during World War II with 85% of the hotel rooms leased by the military to serve as barracks. But the years of the Postwar Boom were Normandy Shores Golf Club's heyday. Around 1956 the City of Miami Beach hired Mark Manahah to redesign the golf course.

Once the renovation was complete Normandy Shores became a hot spot for both the famous and infamous. The famous: Sam Snead, Arnold Palmer, and Peter Thompson were just few of now legendary professional golfers that played Normandy Shores Golf Club on a regular basis. Some of the other regulars went by names like Stork, Charlie the Blade, Three-Iron Ward.

Over the last 50 years the golf course has been maintained by the City of Miami Beach and because of the easy access of the 79th street causeway, Normandy Shores Golf Course became the perfect spot for Miami Beach, Miami, North Miami and Miami Shores golfers to enjoy a round.

Fast forward to 2008, the City of Miami Beach has spent over $9 million to renovate the now spectacular Normandy Shores Golf Club. The City hired world renowned golf course architect Arthur Hills to redesign the aging course and bring it back to its current state of glory.

In 2011 the Inaugural South Beach International Amateur was played the week before Christmas at Normandy Shores and Miami Beach Golf Clubs, becoming the highest ranked inaugural amateur tournament since rankings were introduced. Unites States Amateur Champion and Current PGA TOUR player Kelly Kraft wins the 72 hole event with a 4 under total. Move forward to 2020 and the South Beach International Amateur has been the 5th to 8th ranked field in the world for five straight years just behind the United States Amateur, British Amateur, Western Amateur and NCAA Division 1 Championship. Yearly the SBIA has one of the best and largest international fields in the world with 30 or more countries represented.